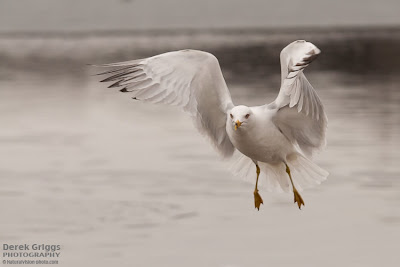 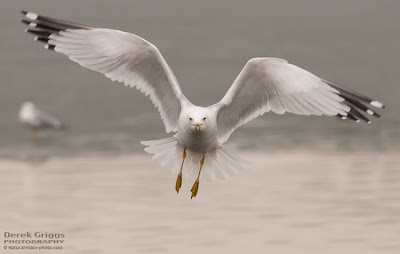 I headed out last Saturday in hopes more species had made their way back north. Although, many species have made their ways back, geese, ducks, Red-wing Blackbirds, among others. I didn't find as many song birds as I had wanted, so I photographed common Ring-billed Gulls.
Posted by Derek Griggs at 9:37 AM No comments: 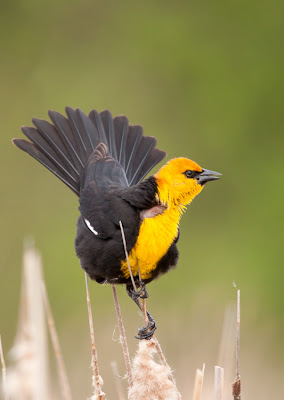 Spring is right around the corner and I can't wait. Mine and Chad's photography has come to a halt over the last few weeks because of a lack of subjects. Over the last few days I have noticed birds moving back north for the summer. On Wednesday I was driving near my house when I saw two Bald Eagles fixing up their nest that they have been using for the last 3 years. As soon as we can get Chad's boat on the water we are going to go photograph some Yellow-headed Blackbirds.
Posted by Derek Griggs at 9:39 AM No comments:

Last week I sent an email to Chad saying that is good to go back and look at older photos. They don't have to be years old, they can be only a week old. Sometimes you can uncover hidden gems. My last trip to Memorial Park last week, I wasn't very happy with my results. I decided to go through all the photos I took to see if I had missed something. 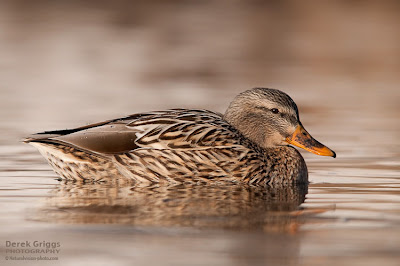 Why did I originally skip over this? My guess is that was wasn't expecting anything real good coming out of that shoot. What I like about this image is that I was on eye level with the duck creating the blur in the foreground. Also, the warm tones in the image says that spring is coming!!
Posted by Derek Griggs at 11:19 AM No comments:

This photo of the alpha male at the Wildlife Science Center was one of the first pictures I ever took with a digital SLR. Looking back I had no idea of what setting to use, but I somehow got this one to turn out and still is one of my favorite photos. 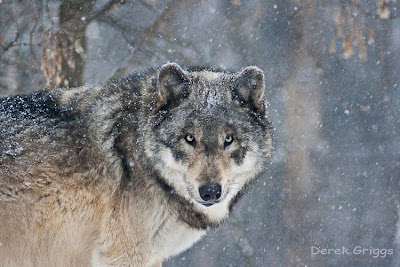 This next image was taken just over a year at the Grizzly and Wolf Discovery Center in West Yellowstone, MT. 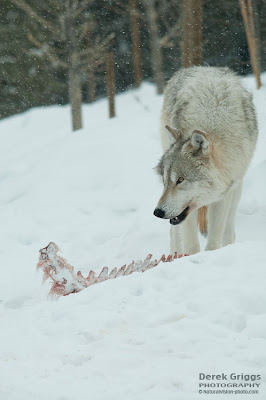 Although wolves have made a solid come back over the years. Wolves are still being persecuted as a menace and danger to humans. Recently, just before our last trip up north to the bog was put into jeopardy because of a over zealous farmer who complained to the DNR saying the deer rib cages at the bird feeder stations were attracting wolves to the area. Fortunately for us the DNR realized that wolves are in that area regardless. Wolves play a vital role in the wild preying on the sick, old and weak. By removing the weaker prey animals keeps deer, moose, caribou populations healthy.

In the 19th and 20th centuries humans almost wipe wolves off the face of the earth. Good thing wolves can thrive in hostel evironments otherwise I wouldn't get to photograph my favorite animal. 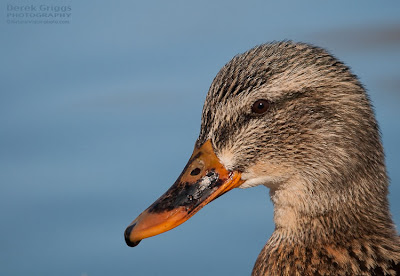 I wish I had something different to post for all of you, but I have spent most of the last week photographing ducks at the local pond. On Tuesday I made my 3rd trip to Memorial Park in the last week. I was looking for a different perspective of the ducks. I ended up with a nice portrait of a female mallard with a nice light blue background.

Remember to click on the image to view it larger!
Posted by Derek Griggs at 1:40 PM No comments: 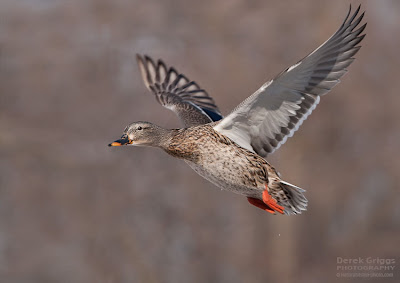 I spent a beautiful February morning photographing ducks at Memorial Park in Shakopee. The warm sun was out and the ducks were flying. This time of year is great for duck photography because the males are trying to show off for the ladies and are in their best plumage. Normally out of 100 bird in flight shots I end up with 5-7 that are good. Yesterday I shot 200 photos and I liked over 60! Check out the gallery for more photos, and don't forget to check out Chad's Ring Neck Duck photos from Florida.
Posted by Derek Griggs at 10:06 AM No comments: